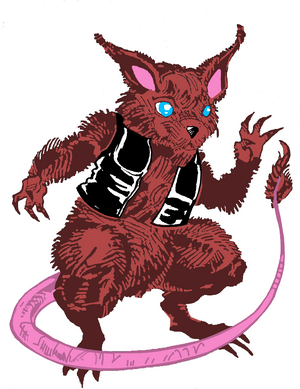 Nature of Members: Fasanni are bipedal rodentoids averaging 1.4 meters tall. Their ears are long and pointed, their eyes are large, blue and bright. Their muzzles are conical and bewhiskered, like a Earthly rodent's. They have hairless tails.  Their legs end in clawed feet, but their hands are close to Human. Their short, course fur can be any shade of red, shading through pink to white. They usually only wear clothing on their upper body.

Customarily, Fasanni clothing closely matches the clothing of whatever culture the Fasanni are among or are most fond of. The Fasanni are native to a 1.1-G world with about 1.2 times Earth's atmosphere and an average temperature of 75°. Their native star was a dim K-class sun, considerably hotter and brighter than Sol, and they prefer brighter light than is found inside most Human buildings.

Organization: The Fasanni, among themselves tend towards small groups of ad hoc individuals related by their goals. However, among different races,  they'll take on whichever organization seems appropriate for the interaction

Government: Corporate bureaucracy.  The Fasanni are all stock-holders in Fasan Inc.

Every member of the race has one share granted on reaching majority. Additional shares can be acquired through various means the race has not been willing to openly discuss.

Officers are generally elected at the shareholder meetings, carried out yearly. A Fasan can designate a proxy and those living off world frequently do. Yes this has been a cause for fraud and scandal in the past. They don't air their dirty laundry in public, just yours.

Culture: Fasanni are cultural chameleons, taking on the characteristics of whatever race they happen to be living among. The race is known for producing some of the galaxy's most articulate, incisive writing. Fasanni are often employed as reporters, envoys, personal secretaries, salesmen and in other communications-related fields.

In spite of, or perhaps because of, the ease with which they adopt other cultures' ways, the Fasann have little culture of their own. All that remains of the aboriginal Fasanni culture is the language, which is still used for names, though not often in daily speech. The only reason the Fasanni still learn their ancestral tongue is to allow them to communicate privately among themselves.

Fasanni are often rather contemptuous of members of other races, considering their adherence to a single set of racial customs quaint and provincial. This opinion is generally not apparent to anybody who doesn't speak Fasanni, since  in other languages the race tends to be flawlessly polite.

Few creatures care to offend a Fasann, for the race's barbed wit and gift for parody is legendary. An individual who tries to match wits with a Fasann will soon find himself a laughingstock, the butt of all the popular jokes. Frequently, the only thing that can save the reputation of such an unfortunate is the intervention of a (very expensive) Fasanni public relations firm.

The Fasanni ability to assimilate other languages and cultures is completely instinctive, and appears almost psychic to members of other races. The smallest behavioral clues can tell a Fasann volumes about an unfamiliar culture's habits and etiquette. Within a day of contact with a new culture, the Fasann is already adapting to local customs and manners, within a week, he'll have picked up whole phrases in the new language. True fluency, of course, takes much longer!

The Fasanni don't always simply ape local customs. Among the Truul, for instance, a Fasann would adopt a dominant personality, meeting that race's need for direction. Among the telepathic Ane and their enigmatic near invisible culture, on the other hand, the Fasann would behave in a reserved fashion, as they see befits an outsider race.

There are limits to the race's ability to absorb culture. A Fasann who spent a year on a mining colony would possess a wealth of mining lore and miner's customs, but to actually mine minerals he would need to go down into the tunnels and learn to use the equipment like everybody else.

There are moral limits as well. A Fasann among Gormelites would behave aggressively, but not violently. Among the Kaa, they would not acquire that race's cruel callousness.

Almost the only universal trait among Fasanni seems to be a disdain for violent methods. A Fasann tends to think he can out-talk or out-think any potential threat, and will resort to violence only as an absolute last resort (this will not stop him from making extravagant and bloodthirsty, but convincing, threats). When forced to go armed, Fasanni tend to favor stunners, rubber bullets, cudgels and other non-fatal means of self defense. Judo is the martial art of choice.

Fasanni also have a racial penchant for crime and unscrupulous behavior. Many Fasanni make their living as confidence men, industrial spies, or embezzlers. However, many are also superlative detectives, tracking down Fasanni and non-Fasanni criminals with equal skill.

They are not a technical race. They tend to avoid occupations like mechanic or computer operator (although they have no problem learning enough to operate a word processor or help crew a spaceship), and are almost never scientists or engineers. They frequently excel at the social sciences — history, sociology, xenology, etc.

Fasanni are most known for their accurate and incisive journalistic work.

The inquisitive and persistent Fasann reporter is respected and feared throughout the Fulcrum Sector. Even Kaa warlords know better than to cross one. They also make excellent editorial and speech writers, with an uncanny ability to incite the populace for or against a certain cause. Fasanni public relations and advertising firms are particularly valued for their ability to actually become ardent proponents of a certain cause or company, at least while they're working on that account (although they seldom become ardent enough to reduce their fee).

Fasanni voices are not melodious and the race has little talent for music (though they make excellent lyricists). Likewise they show little talent in the visual arts, including film and its various descendants. They are natural actors, and often appear in dramatic productions under the direction of some other race.

Religion: The aboriginal Fasanni religion was a rudimentary totemism, and is now completely dead. Fasanni often adopt local religions with apparent zeal, though the more dogmatic faiths are often appalled by the Fasanni tendency to change religions when they change address.

The Fassani enjoy the idea of the Federation and are quickly dispersing to various worlds there. Their attempts to gain access to the Romulan Star Empire have been less successful, stymied by Romulan xenophobia..

Public or Secret?: The Fassani themselves are public, but they have hidden depths.

Publicly Stated Goal: To be friends, facilitate diplomacy and report what they find from the far corners of the universe.

Relative Wealth: Compared to the Federation, Small fry.  Compared to an Individual, large. The Fassani homeworld could afford a defense fleet if it were of a mind to. as it is, much of their technical support is done by Humans and others.

Race Advantages: Cultural Chameleons.  The Fassani have a natural eye for understanding other cultures and societies.

Race disadvantages: Color Blindness - the Fassani generally dislike the sort of thinking that makes for good engineering and science. This is not universal, but the engineer with a head for numbers is much more rare among Fassani than other species.

Area of Operation:  The Fulcrum region.

History of the Race: When discovered by Corporate Sector scouts,  the Fasanni were using iron swords, beasts of burden and sails - this was after tens of thousands of years of peaceful civilization. The Corporate Scout met the Fasanni,  the discovery was followed up on.  Before too long, the Fasanni had incorporated their homeworld and were leasing exploitation rights to various corporate world competitors.

Since then, Fasan has become a modern world, with Humans, Irari, An Phar and others handling the technical stuff.  The recent introduction of energy economy accounting has boosted standards of living on Fasan markedly.

Eventually the Fasanni realized that the local races were in dire danger of being dominated by either Human empires or the Kaa. The Fasanni, the An Phar, the Gerodans and the Jaril formed a sort of ad hoc community to find a solution.  The Fassani invented the idea of the Fulcrum which was later refined by the other races - it has been a bigger success than anticipated bringing the Federation, the Romulans and the Acceptians to the table to talk, like civilized people.

The Fasanni feel that the Fulcrum is an outstanding success and now, hope to bring the Thasites to the table.  Although this is unlikely they point to the willingness of the Federation the Romulans and the Acceptians to talk, even if noncommittally for now.

After all, once you have the audience engaged, then persuasion is half way done.

Retrieved from "https://trekcreative.fandom.com/wiki/Fasanni?oldid=10734"
Community content is available under CC-BY-SA unless otherwise noted.